Rebecca writes books about—and inspired by—the Middle Ages. She earned her doctorate at the University of North Carolina at Chapel Hill, where she studied Anglo-Saxon manuscripts and medieval literature written in Old and Middle English, Old Norse, and other fascinating languages. A native of Vero Beach, Florida, she now lives in Ohio, where is a professor of English at Youngstown State University.

When she was growing up, reading was like breathing to Rebecca. It still is. She loved the Little House books, and fought with her brother over books in the Alfred Hitchcock and the Three Investigators series. Later, she discovered science fiction and fantasy, from The Lord of the Rings to Arthur C. Clarke to Ursula K. LeGuin’s Earthsea series, and many, many other books that she and her best friend shared. They still do. 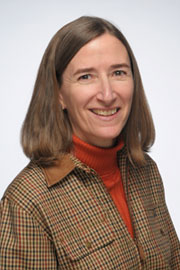